Presented at the 17th Annual Scientific Meeting of the American Society of Clinical Hypnosis, New Orleans, 1974

"The English speaking medical community held the position regarding magnetism which was consonant with the general attitude of established medicine.  The New Orleans medical journals, contained reports on the value of mesmerism in treating hysteria (Periscope of Practical Medicine, 1844) and also the use of mesmeric sleep for surgical anesthesia (Dugas, 1845).  ... Since all the communications records and minutes of The Société du Magnétisme de la Nouvelle-Orléans were in French, it is unlikely that the English speaking medical community would have been particularly familiar with its operation." 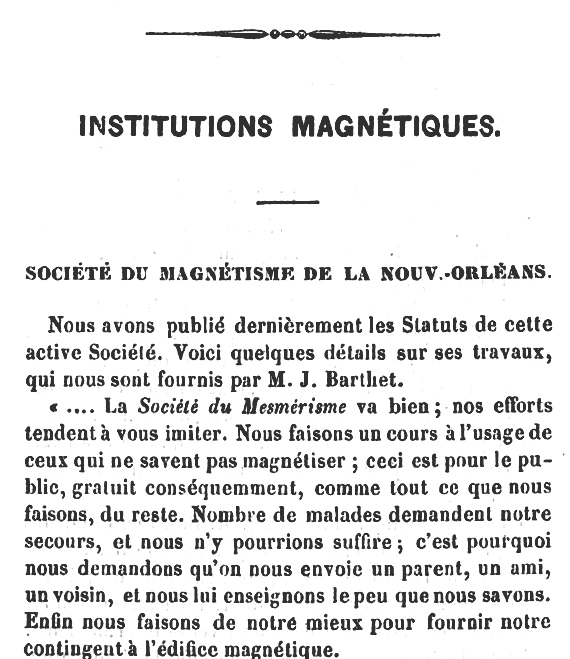 "The Société du Magnétisme de la Nouvelle-Orléans was the largest, most active, and most enduring American mesmeric (hypnotic) organization of its day.

This important group was officially established in 1845 and was in existence until the time of the Civil War.  French influence upon the early course of development of hypnosis in America was significant in New Orleans, and also New England.  The New Orleans Society's transactions were published in a Paris-based French-language periodical, Journal du Magnétisme, the constitution was published in the 1847 volume.

Rules of the New Orleans Society of Magnetism

To reach that goal, the New Orleans Society of Magnetism, founded on the 9th of April 1845, established ...

The New Orleans group dissolved probably because of the blockade of the South which disrupted contact with France and other difficulties occasioned by the conflict.  ... No hypnosis organization of consequence subsequently appeared on the American scene until nearly a century later when the Society for Clinical and Experiment Hypnosis was founded in 1949.