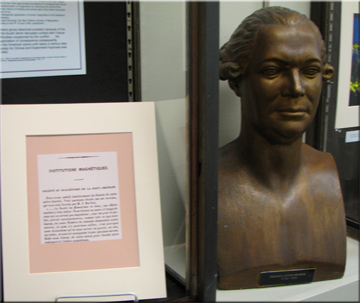 Mesmer was German physician whose system of therapeutics, known as mesmerism, was the forerunner of the modern practice of hypnotism.

In 1775 Mesmer revised his theory of “animal gravitation” to one of “animal magnetism,” wherein the invisible fluid in the body acted according to the laws of magnetism. According to Mesmer, “animal magnetism” could be activated by any magnetized object and manipulated by any trained person. … Mesmer devised various therapeutic treatments to achieve harmonious fluid flow, and in many of these treatments he was a forceful and rather dramatic personal participant.

Accused by Viennese physicians of fraud, Mesmer left Austria and settled in Paris in 1778. There he continued to enjoy a highly lucrative practice but again attracted the antagonism of the medical profession, and in 1784 King Louis XVI appointed a commission of scientists and physicians to investigate Mesmer's methods; among the commission's members were the American inventor and statesman Benjamin Franklin and the French chemist Antoine-Laurent Lavoisier. They reported that Mesmer was unable to support his scientific claims, and the mesmerist movement thereafter declined.  …

Whatever may be said about his therapeutic system, Mesmer did often achieve a close rapport with his patients and seems to have actually alleviated certain nervous disorders in them. More importantly, the further investigation of the trance state by his followers eventually led to the development of legitimate applications of hypnotism.