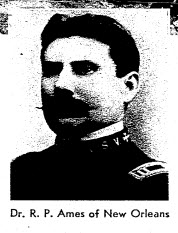 Medals in the Matas Library Collection

Dr. R. P. Ames was a graduate of the Tulane Medical Department (1890).  He served n New Orleans he served as an ambulance student at the Charity Hospital, assistant house surgeon at Hotel Dieu. He was connected with the United States Public Health Service in New Orleans.  He served as a surgeon during the Spanish-American War. He believed that yellow fever was not contagious and that the disease was transmitted by mosquitos.

Roger Post Ames served as a contract surgeon served with Major Walter Reed during the famous yellow fever experimentations in Cuba at Camp Lazear.  Dr. Ames was in charge of Camp Lazear near Columbia barracks outside Havana.  He successfully cared for the majority of the yellow fever cases and contracted the disease during his service.  Dr. Ames died at 44 years old on November 15, 1914, at Port Barrios, Guatemala.

Dr. Ames received several awards posthumously for his work revealing the cause yellow fever. He was awarded the Order of Carlos Finlay 1928 (medal to Jessie Daniel Ames, widow of Roger Post Ames) on December 3, 1952, Havana, Cuba.  The Camp Lazear research group was awarded the Congressional Medal of Honor in 1929 in recognition of the "high public service rendered and disabilities contracted in the interest of humanity and science as voluntary subjects for the experimentation during the yellow-fever investigations in Cuba."   Roger P. Ames was added to the group receiving this honor when the original act was subsequently amended on September 2, 1958 (70 Stat. 484; and 72 Stat. 1702).