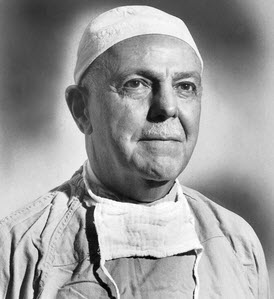 Alton Ochsner Sr., M.D. founder of the Ochsner Medical Foundation, graduated from the Tulane School of Medicine and served on the faculty from 1926-1956. During this period he demonstrated the link between smoking and lung cancer. - Tulane Medical Center, History in Review 1834-1984 - newspaper supplement

A man whose sparkling eyes and winning smile endeared him to all who knew him, he undertook heavy responsibilities at an early stage in his career. Recognition of his astute intellect and leadership qualities led to his appointment, at the age of 31 years, to the chairmanship of the Department of Surgery at Tulane University School of Medicine in New Orleans to succeed the world-renowned Dr Rudolph Matas. There he rose to national and international prominence as he organized a prestigious department of highly capable and distinguished surgeons acclaimed for their teaching, research, and patient care activities. - DeBakey ME. Historical perspectives of The American Association for Thoracic Surgery: Alton Ochsner, MD (1896-1981). J Thorac Cardiovasc Surg. (2005 September) 130(3):875-6.

While a young medical student at Washington University, Alton Ochsner observed the autopsy of a lung cancer victim. His professor impressed upon him the rarity of such a case.

Years later, while at Tulane, Dr. Ochsner remembered that lesson when he began to notice a dramatic increase in the number of lung cancer cases he dealt with. He discovered that smoking was not prevalent prior to World War I, when machine-made cigarettes first came into wide-spread use. As a result, Ochsner became the first to link smoking with lung cancer.

See PubMed for a list of historic articles on "Ochsner A" http://www.ncbi.nlm.nih.gov/pubmed?term=Ochsner+A[PS]