Biography of B. Bernard Weinstein, M.D.

Dr. Weinstein was founder and leader of many international sterility and fertility societies in the United States and abroad, among them the American Society for the Study of Sterility and the International Fertility Association.
...
Dr. Weinstein was a senior visiting surgeon at Charity Hospital from 1938 to 1953 and later served as consultant in gynecology to Sara Mayo, Flint-Goodridge Hospitals and Touro Infirmary. 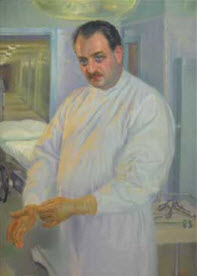