Medical College of Louisiana, building located on Common Street from Baronne Street during the Civil War. - Building retained by the Freedmen's Bureau winter of 1863. 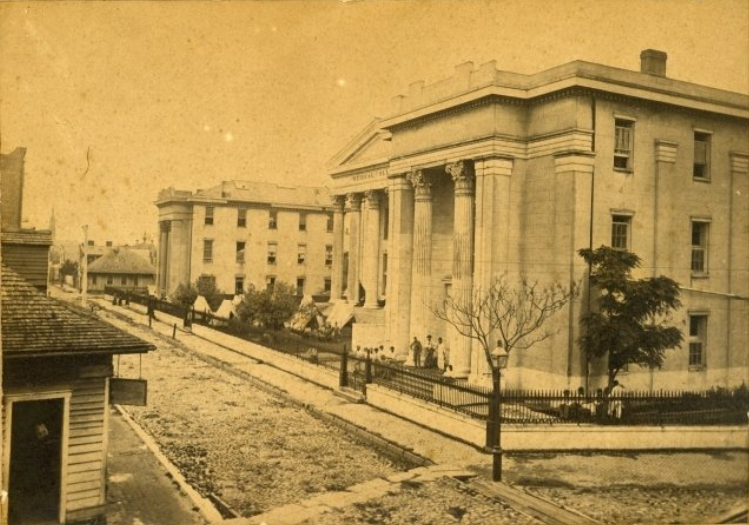 The School of Medicine of the University of Louisiana in New Orleans was among the facilities retained by the Freedmen's Bureau. It was converted into a elementary school after the building was seized during the winter of 1863.   During much of the war the buildings were occupied by the Freemen's Bureau schools' students and teachers. The New Orleans School of Medicine, a second medical school occupied during the war and the Medical Department of the University of Louisiana, began the business of medical education once again in late 1865.  Dr. Erasmus Darwin Fenner of the New Orleans School of Medicine applied to the military authorities for the return of that schools' facilities in the spring of 1865.

Prior to the war New Orleans was on its way to becoming the primary site medical education in the South. New Orleans had educated French physicians with a recent influx of American medical educators in the decades before the war.  There were unrivaled facilities for medical study, including Charity Hospital, founded in the 18th century, that proved to provide an extensive laboratory for medical studies.  The Medical College of the University of Louisiana was founded sixteen years before the war began in 1834 and the New Orleans School of Medicine was founded in 1856 by Dr. Fenner.  Medical journalism was beginning to advance in the professional medical societies with the New Orleans Medical and Surgical Journal and Southern Medical Reports.

"April 1861 was the close of the most successful year that  medical educators had seen in the history of New Orleans - or were to see for another fifty years. The outbreak of hostilities  called students and faculty from the academic halls and ended  one of the most flourishing and colorful periods in the history of  medical education in Louisiana. Both schools managed to stay  open for the academic year of 1861-1862, but a drastic decline  in enrollment foreshadowed their imminent close.  The university school (now Tulane University) dropped from 404 to 94 students, and the New Orleans Medical College from 236 to 32. The Federal occupation of New Orleans in 1862 was the final blow which temporarily halted  all formal medical education."  - Duffy, John. "Sectional conflict and medical education in Louisiana," Journal of Southern History, 23 (1957), p.303.

General Nathaniel P. Banks (1816-1884) set up a special Board of Education for the newly freed enslaved people and authorized a system of army-supervised schools in March of 1865.  This Board established new schools and consolidated them with those operating independently of the military government, including several started under the auspices of the American Missionary Association.  Two officers in the Union army, Major B. Rush Plumly and Lieutenant E. M. Wheelock both abolitionists who did not object to employing blacks as teachers established ninety-five schools with 162 teachers for black children by the end of 1864.  But black teachers ran risks in the rural parishes, so often white southern women, most of whom were from Unionist families in New Orleans, made up the teaching staffs. Men were not readily available and a number of the benevolent societies, like the American Missionary Association, were unwilling to send people to Louisiana in fear of yellow fever and other summer illness that afflicted New Orleans.  While some southern whites realized that an educated labor force was more valuable to them than an uneducated one, the majority felt that the emphasis should be on providing vocational skills or on teaching freedmen to be good domestic servants. In general, most of the whites population in Louisiana objected vehemently when provost marshals seized school buildings that had been used for whites, including the Medical College of Louisiana, and turned them over for the education of blacks.  General Banks supported this educational system by giving good salaries partly raised from a special property tax, with other funding raised through a hospital fund and also taxes levied by the army on cotton, sugar, and molasses. A normal school program was begun in which prospective teachers obtained training for one to six weeks before taking their first assignment.  The one issue that remained was permanent funding for the freedmen's school system.  Banks thought that whites would refuse to support black schools with a general property tax if the conservatives regained power and he knew that the freedmen were too poor to support the schools without Federal funding.    Federal funding was not forthcoming and Banks’s school system for blacks did not last long after he left New Orleans in September 1865.  The Freedman's Bureau directed that all schools be suspended and the schools officially closed on January 31, 1865  with a debt of $80,000.

- Louisiana. Constitutional Convention (1864). Debates in the Convention for the revision and amendment of the constitution of the state of Louisiana : assembled at Liberty Hall, New Orleans, ...New Orleans, 1864. p. 493-494.