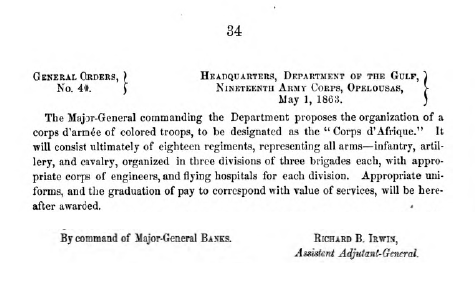 The Major-General commanding the Department proposes the organization of a corps d'armée of colored troops, to be designated as the “Corps d'Afrique.” It will consist ultimately of eighteen regiments, representing all arms—infantry, artillery, and cavalry, organized in three divisions of three brigades each, with appropriate corps
of engineers, and flying hospitals for each division. Appropriate uniforms, and the graduation of pay to correspond with value of services, will be hereafter awarded.
...
By command of Major-General Banks.
Richard b. Irwin, Assistant Adjutant-General.

The war of the rebellion: a compilation of the official records of the Union and Confederate armies. Pub. under the direction of the secretary of war. Ser.1:v.26:pt.1:Reports. United States.Washington, Govt. print. off., 1889.