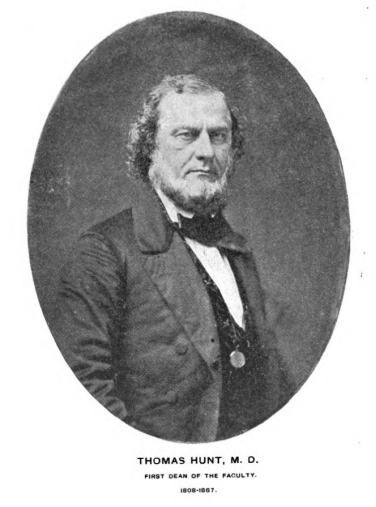 The Medical College of Louisiana, now Tulane University School of Medicine, was founded in 1834 by three young physicians: Dr. Thomas Hunt, Dr. John H. Harrison and Dr. Warren Stone.  In January 1835 the first lecture was delivered by Dr. Hunt in the Strangers Unitarian Church, thanks to Parson Theodore Clapp. Classes were taught in a variety of locations including Charity Hospital which predates the founding of the school by almost one hundred years.

The writer attributes the early existence of the college to Dr. Thomas Hunt and Dr. Warren Stone, who gravitated to New Orleans during the cholera epidemics in the early thirties. "Sickness was the reward of Dr. Hunt's efforts and poverty the result of Dr. Stone's journey."

Images of The Prospectus 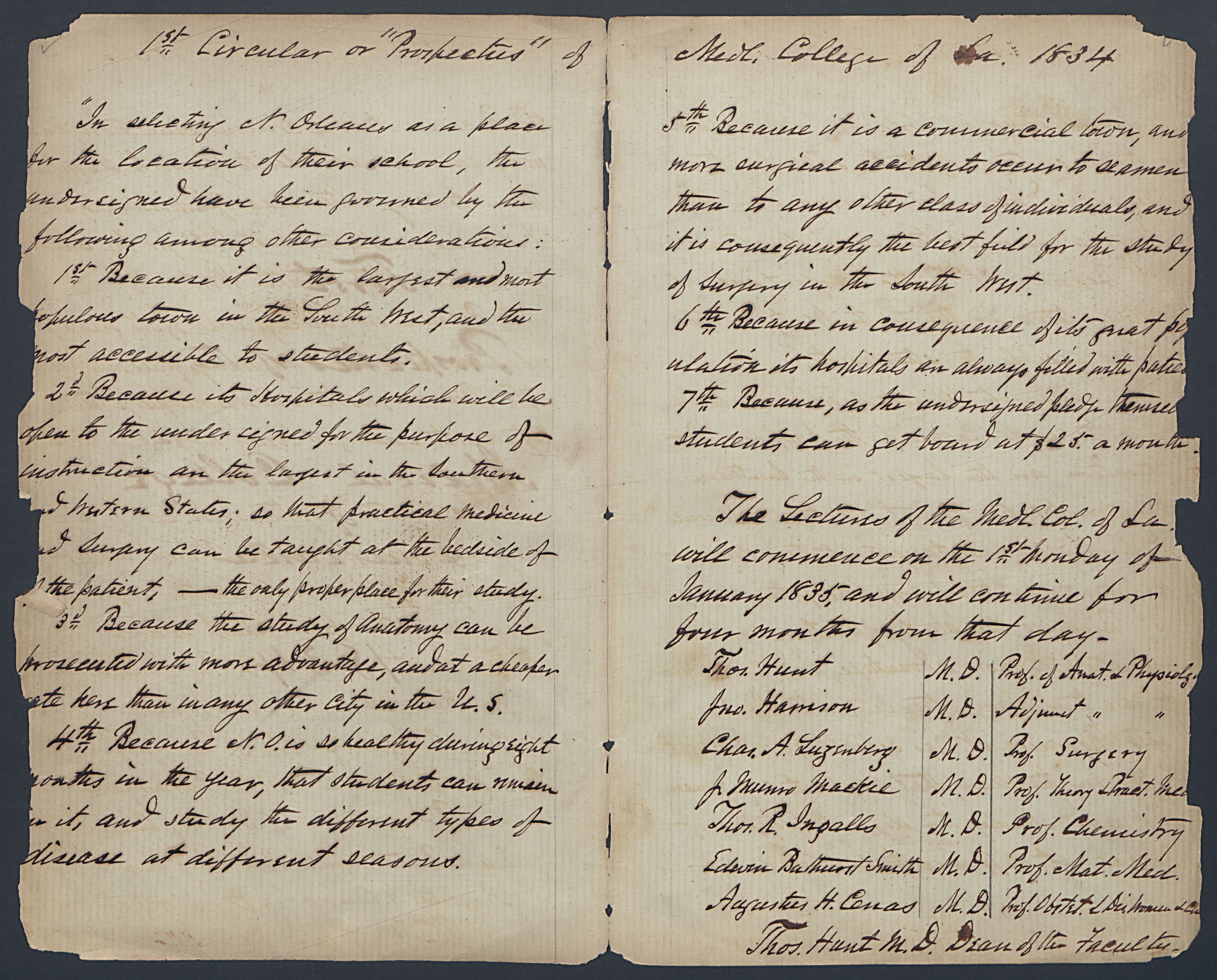 Three men, each only 26 years of age, founded the Medical College of Louisiana in 1834: Thomas Hunt of Charleston, South Carolina; Warren Stone of Vermont and John Harrison of Washington, D.C.

President of the University of Louisiana -1868

Thomas Hunt was born in Charleston, South Carolina and graduated with a medical degree from the University of Pennsylvania in 1829.  While in medical practice in Charleston he received distinction for his successful treatment of cholera.

When the ship, Amelia, wrecked off Folly Island off Charleston Harbor in 1832, Dr. Hunt at 24 years old, along with a passenger, Dr. Warren Stone, managed a outbreak of cholera among the crew and passengers.  He and Dr. Stone established a friendship and Dr. Hunt came to New Orleans in 1833. They are two of the original founders of the University of Louisiana. Dr. Hunt was the author of the prospectus for the organization.  He was appointed as the first Professor of Anatomy and Physiology and was elected Dean.  The first class had eleven students.  Dr. Hunt played a large role in creating a solid foundation for the institution and helped obtain a State endowment in 1843. 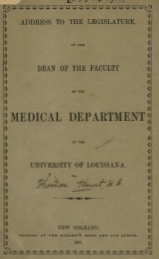 When the new constitution for the State was adopted a clause was put into it establishing a State University and constituting the " Medical College of Louisiana," as then established as the Medical Department of the University. In 1847 Louisiana permitted the medical faculty to erect the first building it ever owned on a lot belonging to the State, on two conditions, first, that the members of the faculty should give their service to the Charity Hospital without pay, instead of being paid therefor, as had previously been the case.
By 1863 the Medical School had matriculated 4,119 students and had at the session of 1860-61 over 400 students. But when New Orleans was occupied in 1862 by the United States Navy and Army, the Medical Department suspended until the session of 1865-6.  "Dr. Hunt, whose fortunes were shattered and whose health was feeble, left New Orleans for a time and went to Havana, where his reputation brought him a large practice, despite the fact that at fifty-four years of age he was obliged to learn a new language, and where he received a degree in the name of the Royal University of Havana.   In 1865 the Medical Department re-opened.  Dr. Hunt returned and obtained a new appropriation from the Louisiana Legislature for the immediate needs of the College.

He contributed to many medical journals and wrote on the treatment of yellow fever.  Dr. Hunt was house-surgeon at the New Orleans Charity Hospital and also served as President of the Physico-Medical Society.

The First Circular or Prospectus of the Medical College of Louisiana

The Medical College of Louisiana, now Tulane University School of Medicine, was founded by three young physicians in 1834. They published a document, officially titled The First Circular or Prospectus of the Medical College of Louisiana. This is the original document pertaining to the establishment of Tulane University as a whole. This manuscript served as a copy for the printer announcement of and justification for the founding of the first medical school in New Orleans. It was drafted on 23 September 1834 by Dr. Thomas Hunt with the assistance of Dr's. John H. Harrison and Warren Stone. The Prospectus was published a week later, on 29 September 1834, in French and English versions on the front page of the L'Abeille (The Bee), the local, bilingual newspaper.

In selecting N. Orleans as a place for the location of their school the undersigned have been governed by the following among other considerations: