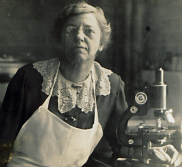 Pioneer Women in Medicine beginning her practice in 1904 in the State of Louisiana.

The Tulane Graduates’ Magazine, v.1 (no.2), October, 1911, p.7-8  – Women in the Medical Faculty … "No question has been more bitterly debated…On November 15, the board of administrators let down one of the barriers of conservatism and appointed two women members of the faculty, Dr. Edith Loeber-Ballard in the department of clinical obstetrics and Dr. Elizabeth Bass in the department of pathology."

Dr. Elizabeth Bass was a 1904 graduate of the Woman's Medical College of Pennsylvania and one of the first women physicians on the faculty at Tulane University School of Medicine. She began her career at Tulane in 1911 as Assistant Demonstrator in Surgical Pathology four years before women were admitted to Tulane as medical students. She retired in 1941.  Dr. Bass was recognized by the Alumnae Association of the Woman’s Medical College of Pennsylvania (June, 1952) for “her distinguished service in medical education and research and her inspiring interest in literature by and about women in medicine".   In 1953 she was honored with the Elizabeth Blackwell Centennial medal of the American Medical Women's Association.   She lectured on women’s history in medicine and through her contacts and associations, she collected a vast array of materials pertaining to women in medicine that were donated to the Rudolph Matas Library of the Health Sciences. The Elizabeth Bass Collection on Women in Medicine consists of newspaper clippings, pictures, photographs, glass magic lantern slides, books, medical school catalogs.

Dr. Bass came from a medically prominent family in Mississippi. Her brother Charles Cassidy Bass was Dean of Tulane Medical School from 1922 to 1940, and her sister Cora was also a physician. Dr. Bass was involved in the process to admit women to professional medical associations, medical school faculties, along with the fight to admit women to study medicine. She helped found the New Orleans Dispensary for Women and Children in 1905.   She was active in the Era Club (New Orleans) which was composed of leading women in the city for the purpose of advancing women’s suffrage.  The Era Club was involved in the question that was bitterly debated to admit women to professional medical organizations, medical classes and in the appointment women physicians on the teaching staffs in Louisiana the early part of the 20th century.  Elizabeth Bass was the first woman admitted to the Orleans Parish Medical Society and the first one to hold a major office in the Society (secretary 1920-22, vice president 1923). She was also the editor of the OPMS Bulletin (Orleans Parish Medical Society) for a number of years. She served as president of the American Medical Women's Association (1921-1922) and founded its New Orleans group.

Era Club (established 1896) and Women in Medicine at Tulane University, 1912

”The recent appointment of Mrs. Loeber-Ballard and Miss Elizabeth Bass to the faculty of Tulane Medical College marking the increasing recognition of the value of the services of women in medicine in this institution, and it is hoped, will lead to the opening of the full course of four years in medicine to women students. … [conclusion] The Era Club, therefore, impelled in this matter by the principle of its organization, which is to promote and protect the advancement of women, hereby declares that if in the future a women applicant for admission to the Medical School of Tulane University is refused such admission for an un interrupted, unconditional, full medical course, the Era Club binds itself to stand by such applicant to assist her and to defray the legal expenses , in case of litigation, of a suit against the Board of Administrators to have the questions decided by the courts.  The collection includes  the Era Club resolution from January 12, 1912 (carbon) and "ERA CLUB" membership card for Dr. Elizabeth Bass, June 1905.

Transcription of a letter in the Elizabeth Bass Collection, Rudolph Matas Library of the Health Sciences