A research guide and general overview of Hogan Archive collections and other helpful research resources for the study of the musical culture of New Orleans. 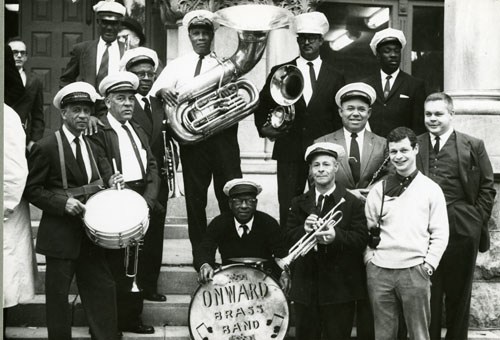 The Hogan Archive Photography Collection (also known as the General Photography Collection) contains approximately 10,000 photographs, arranged alphabetically according to surname of individuals, band names, and subject categories such as “buildings” and “parades.” Please email specialcollections@tulane.edu for a PDF of the collection inventory. 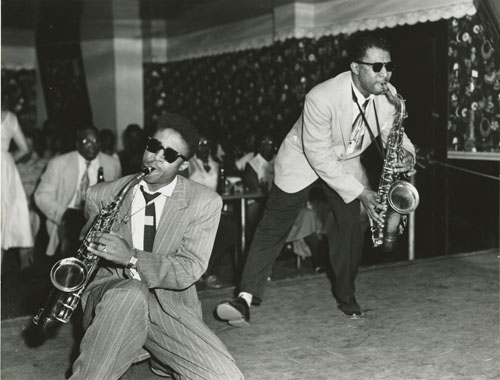 Ralston Crawford (1906-1978) was a Canadian painter, lithographer, and photographer.  He first visited New Orleans with camera in tow in 1938 and returned nearly every year for the rest of his life. A longtime jazz enthusiast, Crawford was drawn to the city’s parades and second lines, its bars and clubs, and of course, its musicians, many of whom he considered his closest friends. In 1949, during his tenure as visiting artist at Louisiana State University, he began methodically documenting the musical culture of the city through photography.

The Ralston Crawford Collection of Jazz Photography was acquired in 1961 and includes 741 of what Crawford deemed his best images New Orleans images.

Danny and Blue Lu Barker
Danny Barker was a New Orleans-born banjoist, guitarist, and vocalist. He spent 35 years in New York, which included a seven-year stint with the Cab Calloway Orchestra. While there, he also wrote songs for his wife, blues vocalist and recording artist Blue Lu Barker. Upon returning home to New Orleans in the 1960s, he and Blue Lu continued to perform while building their reputations as icons of New Orleans music. Danny has been credited with sparking the revival of brass band music in younger generations with his co-founding of the Fairview Baptist Church Band in the 1970s. Also well-regarded as a historian, writer, and mentor, Barker served as assistant curator of the New Orleans Jazz Museum from 1965-1975, and published his autobiography, A Life in Jazz, in 1986. This collection includes photographs, slides, negatives and greeting cards from their personal collection.

Ray Bauduc
Raymond "Ray" Bauduc (1909-1988) was a New Orleans-born drummer who became one of the most successful drum stylists of the swing era, performing with The Scranton Sirens, Joe Venuti and Eddie Lang, the Ben Pollack Orchestra, and the Bob Crosby Orchestra, where he was featured in a ‘band within a band,’ the Bob Cats. Bauduc was an avid amateur photographer as well, and his collection contains his own work, as well as abroad coverage of the bands and performers with which he was associated.

Laurraine Goreau
This collection features research materials that writer Laurraine Goreau collected for her 1975 authorized biography of Mahalia Jackson, Just Mahalia, Baby. Photographs highlight Jackson’s work and influence in the gospel and secular music industries, religious community, and the U.S. civil rights movement of the 1950s and 1960s, up until her death in 1972.

Max Kaminsky
Max Kaminsky (1908-1994) was an accomplished musician at an early age, first playing the cornet before embracing the trumpet as his instrument of choice. He began his career in Boston before moving on to Chicago and New York, where he could collaborate with musicians of the same caliber. Although Kaminsky was not from New Orleans, his family believed his lifelong love of New Orleans jazz made the Hogan Archive a fitting repository for his materials upon his demise. The Max Kaminsky Photography Collection chronicles a fascinating life, with photos from his time in the Navy, world tours, iconic jazz institutions, and performances with artists including Eddie Condon, Jack Teagarden, and Pee Wee Russell.

Robert Palmer
Robert Franklin Palmer (1945-1997) was a writer and critic, working for Rolling Stone and the New York Times.  He authored Deep Blues and Rock and Roll: An Unruly History, among other works.  Palmer’s collection of photographs documents not only his own life, but also serves as a window into the evolution of rock and roll in the 20th century.

Bernie Steinau
Dr. Bernard Meyer “Bernie” Steinau (1927-2002) was born in New Orleans. Between 1950 and 1952, when he earned his medical degree, Steinau photographed numerous parades, funerals, and other events where jazz was played, including the iconic 1951 Eureka Brass Band recording session in the 1500 block of St. Philip Street, New Orleans.